Whenever I wanted to go out for a drink (living in West Kendall) I had to drive 20-30 minutes to reach the destinations like “Wynwood” or “Brickell” and let’s not even get started on that drive down to “South Beach” (with or without traffic); but then, seemingly out of nowhere this little brewery popped up in “Westchester” and all my dreams came true!

But before we get weird at the beard and tell you of their offerings, I’d like to go back to how it all started.

A military man who served his country, John Falco was pulling in the big bucks in the military intelligence field. I remember him telling us during our sit down that he never had to worry about bills or check to see if he ever had enough money in his bank account to support him and his family; but as the old adage goes “money can’t buy happiness.”

While he was making a good sum of money, he was unhappy, unfulfilled; he had other aspirations in life and wanted to break away from the mold of sitting behind a desk & computer day in and day out (but we are grateful for the service he provided this country!).

Four years (2013) ago he was driving by a strip mall, he looked to his wife and said “I want to open a brewery!” Now, this wasn’t just the exclamations of someone who enjoyed beer, but since he came back from his tours, he had been homebrewing as much as he could. After some discussions, she gave her support and John hit the ground running. He put together a business plan, reached out to five different investors & all five of the investors he reached out to were in! And after a couple years of labor, Lincolns Beard Brewing Company was born (2016)! 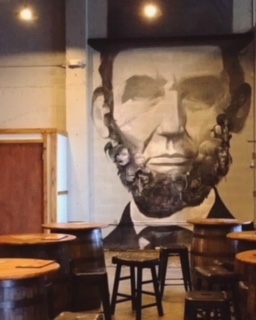 Why Lincolns Beard you may ask? Well sources go back prior to the election of Abraham Lincoln stating that he used to have a clean shaven face, until one day a little girl (Grace Bedell) had written him a letter and told him this:

Dear Sir
My father has just home from the fair and brought home your picture and Mr. Hamlin’s. I am a little girl only 11 years old, but want you should be President of the United States very much so I hope you wont think me very bold to write to such a great man as you are. Have you any little girls about as large as I am if so give them my love and tell her to write to me if you cannot answer this letter. I have yet got four brothers and part of them will vote for you any way and if you let your whiskers grow I will try and get the rest of them to vote for you you would look a great deal better for your face is so thin. All the ladies like whiskers and they would tease their husbands to vote for you and then you would be President. My father is going to vote for you and if I was a man I would vote for you to but I will try to get every one to vote for you that I can I think that rail fence around your picture makes it look very pretty I have got a little baby sister she is nine weeks old and is just as cunning as can be. When you direct your letter direct to Grace Bedell Westfield Chautauqua County New York.

Now what John loved about this was the outright truth and honesty that this little girl had to tell the congressman (whom she had never met) that he should grow a beard so he can get more votes; and what do you know, Lincoln grew a beard and it seems like that’s what won him the presidency. 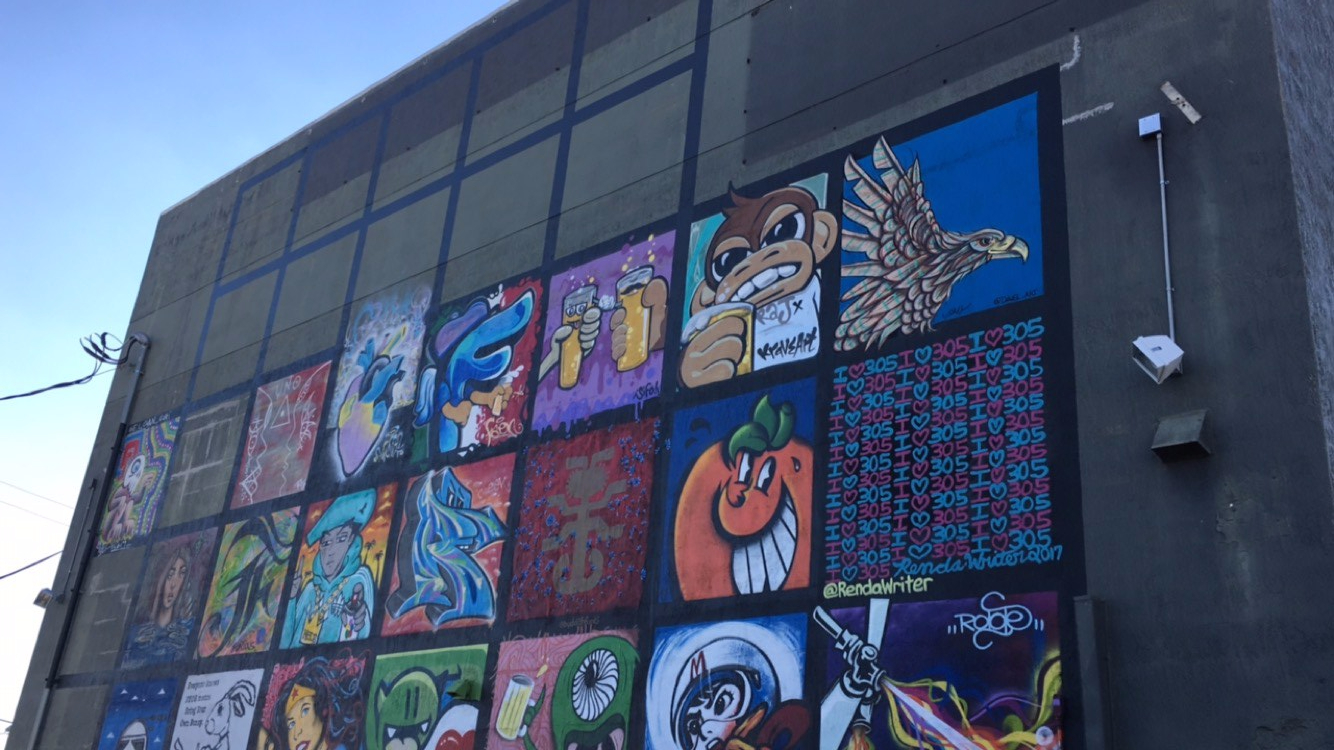 Wanting to emulate that, John wanted to have an honest little brewery that didn’t lie about who they were. They wanted to be weird, they wanted to be different, they wanted people from different backgrounds, rich or poor to come in, kick back and have a good time. With a great staff,  events always going on, and mementos from past events plastered all over the taproom there’s no shortage of ways to get weird at the beard.

And if that wasn’t enough, they are all about the community as well! They will do releases of beer where they give back to charities; they host “Hope For Hops” every year which you pay a set price and get beer, food and a bunch of great memories for knowing that what you paid goes to help “St Judes Childrens Hospital; and the one that meant a lot to me was that when I first met them, they donated to my 24 Hour Run For St Judes event and helped me out a lot with it.

Now before I get all teary eyed, let’s talk about some beer!

Here are the explanations from the brewery:

P. Swayze IPA (6.6% Alc/ 60 IBU): Citrusy. Apricot notes. A legend. A local favorite, P. Swayze’s amazing aroma, juicy flavor, and silky mouthfeel will keep you coming back. Like its namesake, this beer carves its own path. Its throat-ripping tropical and piney hop charge is lifted up and carried by a smooth malt backbone. Just aggressive enough to keep baby out of the corner. Drink this beer and you’ll be crashing pottery classes in no time!

Avenge Me Irish Red (5.5% Alc (in store); 5.3% Alc (website)/ 24 IBU): Clean. Touch of caramel. WOLVERINES! Classic Irish Red with a hint of caramel and a hint of roast. Born in a small town in Colorado, this classic, clean red ale with a hint of caramel is sure to become your comrade. Don’t be deceived by its “red” color, this beer’s ready to take to the mountains and repel the Soviet invasion using any means necessary. WOLVERINES! Sorry…I got carried away.

Bodhi’s Last Wave Double IPA (9.6% Alc/94 IBU): Piney. Citrusy. Vaya con dios. About as West Coasty as a skydiving bank robber with frosted tips, this beer is packed with a gnarly amount of hops. Don’t fear the gravity, though, because its high bittering charge and ABV is masked by its silky smoothness. If you don’t like this double IPA…back off, Warchild…SERIOUSLY!

Lucky Machete Brown Ale (5.0% Alc/ 26 IBU): Slight roast. Tiny sweetness. Chanco’s gift. When there is no place in this world for a man and he must walk into the wilderness (probably to die), he must carry with him only that which will not fail him. This brown ale nails it. With a beautiful dark color and subtle, approachable roast, this beer is a reliable refreshment that is sure to aid your quest.

Clever Girl Hefeweizen (4.5% Alc/ (N/A) IBU): Raptors. HOLD ON TO YOUR BUTTS! Just a chill, easy to drink wheat beer with a hint of banana and spice.

Chet Belgian Tripel (8.2% Alc/ xx IBU): Separating itself from most American Tripels, this beer drinks dry and spicy like its Belgian counterparts. Belgian Tripels are historically named after devils and demons. This beer is no different, sharing its name with the biggest d*ck in movie history. Its complex fruit and spice flavor profile teams nicely with a subtle alcohol warmth. Don’t push it though…too many of these and, like Chet, you’ll end the night as a huge, misshapen pile of revulsion.

Big Whiskey Barrel-Aged Brown Ale (8.1% Alc/ 26 IBU): The original LBBC barrel-aged beer. This multiple award winner is our popular Lucky Machete brown ale dropped in a barrel of choice (see below). This beer is brewed for the grittiest of men and the toughest of women. 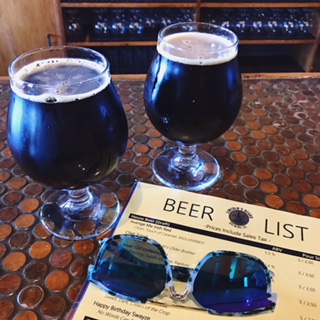 Here’s what I thought:

P. Swayze IPA: A nice amber colour. Caramelesque. With citrus/hoppy scents. And when you sip it back, you can taste the hops; nice, crisp, smooth taste with a hoppy kick. A bit of a citrusy aftertaste as well. And as the description states, there’s a hint of that apricot in the aftertaste as well.

Avenge Me Irish Red: A red caramel/amber colour; malty, hoppy, citrus scents all balanced out. A nice ale. Same tastes as scents, a balanced hoppy, malty, citrus taste. Hits the back of your tongue and leaves a bit of sweetness as well, but it is not overbearing. The sweetness has hints of caramel.

Bodhi’s Last Wave Double IPA: A nice light caramel amber colour. Citrusy, sweet, hoppy scents. Tastes exactly like it smells. It’s a smooth, crisp double. Hoppy, citrusy, a touch of sweetness to round it all out. Hits the back of your tongue with a nice pop.

Happy Birthday Lois IPA: A nice caramel amber colour; citrusy/floral scents, hoppy. You get the same tastes from the scents. It’s a nice hoppy ipa, but it’s not overbearing. It’s crisp, smooth and you can definitely throw them back.

Clever Girl Hefeweizen: A nice gold colour; wheaty scents with a hint of banana; Crisp, light, refreshing tastes. The wheat tastes washes over your mouth. Hits you in the back of the tongue. Smooth, easy drinking beer.

Nunchuck Skills American Wheat W/ Orange Peel: A nice golden colour; wheaty/bready scents with citrus snuck in there. It was a nice crisp ale that was creamy, but left you with a wheaty/orange/citrus taste.

Big Whiskey Barrel-Aged Brown Ale: This was a “Lucky Machete Brown Ale” which was barrel aged for a year in Corsair Distillery casks. Dark brown/black colour; malty/caramel scents/whiskey scents as well. The tastes from the beer which were the whiskey from the barrel it was casked in, and some caramel & a hint of chocolate notes as well.

So all in all with the food they offered (currently Tacos n Tattoos/coming soon The Westchester), ambiance of the brewery and the beers we were served I would give Lincoln’s Beard Brewing Company 5 out of 5 piggys!

With events always lurking and great new beers to try on tap stay tuned for all they have to offer!!!

“Happiness is only real when shared. – Christopher McCandless -John Falco” and I can tell you that happiness is definitely shared when you enter through the doors of Lincoln’s Beard.