It’s a great thing when you sit at a table and are treated to a culinary experience by an innovative chef; it’s another thing when those foods are paired elegantly with craft beers that enrich and push the flavor profiles of both the food & beer as they are paired better together than apart. This is what we encountered when Chef Jason Arroyo invited us to a beer pairing dinner at Russo’s Italian Kitchen in Pembroke Pines.

But before I get into the amazing dinner we experienced that night, I would like to delve into the story of Chef Jason Arroyo .

While talking to Chef Arroyo after the event had ended, I asked him a couple questions to kind of figure out what led him to be who he was today. He had told me that he first got into cooking at an early age; he remembers as far back as when he was 7 years old that he started making simple things like eggs and grilled cheese sandwiches & even went as far as to make his own version of an alfredo sauce with ingredients like sour cream, butter and parmesan cheese! I don’t know about you, but to me that is one creative seven year old.

His love of cooking only grew as the years rolled on; he started culinary school immediately after graduating high school at Johnson & Wales-North Miami while working in the industry at the same time. A year after he started the culinary program, he dropped out to of school to strictly focus on working because he was able to sustain himself financially at such a young age; who didn’t dream of living on their own and getting out of their parents place? That didn’t last though, being the type of person that never leaves anything incomplete he reapplied to the culinary program at Le cordon bleu in Miami and graduated with his degree 4 years later. He had told me while we were chatting that “culinary school definitely gives a great foundation, but working in the field has taught me the more than any program can offer.”

Chef Arroyo worked at Michael’s Genuine for 4 years and the last two years while he was there he was promoted to sous chef under Head Chef Niven Patel of Ghee Miami. He also had small stints at Sugarcane, Bocce Bar and a year as sous chef at a French brasserie La Goulue (currently closed) and he also worked Don Shulas Hotel And Golf Club as banquet chef as well; but to me, that last place of employment was probably the most important of all the other positions he has ever held.

He had met his now fiancee Karla years ago while working at Don Shulas; she had worked reservations and they became very good friends while Chef Arroyo was employed there. After he left, neither of them saw or communicated with each other up until about 8 or 9 years later through social media. They had reconnected, were both at a point in their lives where they were ready for a relationship and started seeing each other exclusively a few short months later; and then 9 more months after that their gorgeous little daughter was born & they are now currently engaged to be wed.

Fun Fact: Karla had told us that she was new to the whole social media scene when she had started her Facebook and Instagram profiles. One day scrolling through her Instagram feed she saw someone who looked like Jason (it was him) and she thought “Nah, that can’t be him.” She didn’t know how to verify if it was him or not, so her sister took the reigns and creeped a bit and found out that person was in fact Jason; and thanks to her sister (who friend requested Jason for her) they were reconnected after almost a decade.
Karla is the owner/General manager of Russo’s Pembroke Pines, but while managing/maintaining the restaurant, she still holds it down in the kitchen to this day! After their daughter was born, they had lost their morning cook at Russo’s and Karla would be on the line cooking, managing the restaurant and taking care of their baby all at the same time. Jason could not stand by and let his fiancee burden all that responsibility alone. So he jumped on board as soon as he could and Jason & Karla have been working together ever since.
After having had worked there a while, Jason needed a creative outlet to push his ingenuity & thank goodness he had an amazing partner in Karla that agreed. Their family friend Phil Reis, who at the time was working for Gold Coast Distributing as their craft beer manager, had suggested that Jason explore his creativity in the realm of beer pairing dinners. And since that discussion almost two years ago, they have done 17 beer pairing dinners and 3 wine dinners. All the food Jason uses are locally sourced for his events. He had told me he visits local markets like Sun Fresh Farms in Davie, FL for produce, eggs, and other fresh & local ingredients; and you can definitely taste the freshness in the dishes he prepares. Having been involved in so many beer pairing dinners in the last couple years, Jason says that he’s acquired a higher tolerance/taste for craft beers and that they have opened up his palette and allowed him to mix & match some amazing new dishes.

Speaking of amazing dishes, let me introduce you to the menu we were offered this evening!

We started with butter fried crab stuffed baozi served with a mustard glaze which was paired with Seaquench Berliner. What I loved about this dish was the salty and bready tastes from the crab bun was matched perfectly with the acidity of the Seaquench Berliner. The crab was fresh and a bit salty and the bun was soft yet crisp and the beers acidic flavor profile offset the taste of the crab bun amazingly. 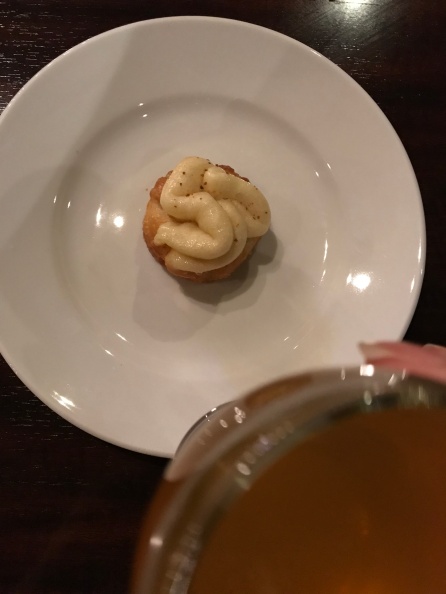 Next up on the menu was a shaved brussel sprout salad with puffed farro, dried cranberries, bottarga and a black garlic-chili dressing which was paired with Truth Serum IPA. This was paired fantastically because you got a flourish of flavors from the brussel sprouts with the cranberries and the garlic chili dressing and that was paired with a beer that you got a nice hoppy, citrusy flavor profile which ended up being a melody in your mouth; the IPA was also smooth and crisp and went down easy.

Next we had duck and Grits- char roasted romanesca veronica and fermented blueberries with Dogfish Heads Pennsylvania Tuxedo. This dish was amazing! All the different flavors converging on your palette at once was something you definitely had to be there to experience. The beer (which was brewed with fresh green spruce tips) screamed “it’s the holidays!” The citrusy notes that have an aftertaste of straight pine resonated well with the gamey duck, cheesy grits & fermented blueberries!

And now the perfect way to wrap up any beer pairing dinner, DESSERT! For which we had a Honey Toffee Crunch Babka which was paired with Dogfish Head’s 120 min IPA! This pairing could not have been more perfect; The babka which came with crunchy flakes, frangeline caramel and pumpkin whipped cream was sweet, but not overbearing. And the different tastes from all three things coming together was just too good to have only one. And the reason the 120 min IPA paired so well with this was because you can’t even taste the malts or hops at all; the 120 min IPA is more like a cognac than a beer. It ranges from 15-20% ABV per batch because it depends on how the yeast reacts during fermentation. They beer is fermented in (3) different tanks so they can get the ABV that high, that’s why there’s the variance in the ABV. 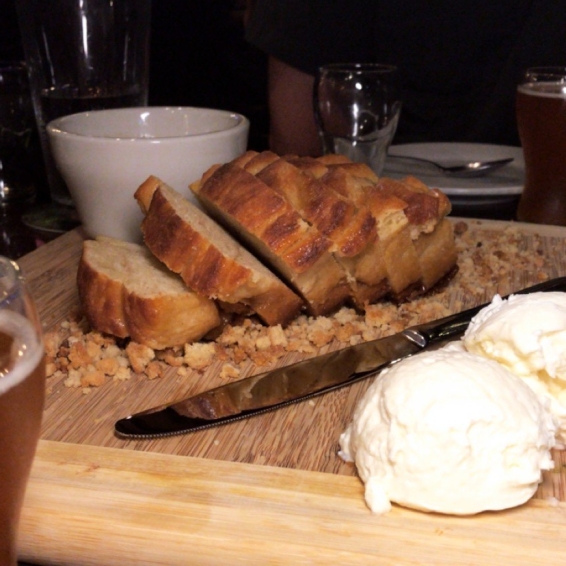 Fun Fact: The conventional oven broke earlier that day, so Chef Arroyo had to make the babka in the brick oven that they usually use for pizzas in the restaurant; and honestly, I’m happy that happened! It came out amazing!

All in all, this was another beer pairing dinner that falls short of words. From the innovation and creativity that flowed out of that kitchen to the amazing beers that were provided by Dogfish Head and paired elegantly with the food to the ingredient that made everything that came out of that kitchen taste so much better, love.