And what an event it was.

John Falco and his crew wanted to do a holiday event. During one of their spitball sessions he asked one of his brewers “hey! let’s do a Noche Buena event!” César Monteagudo replied “John, we’re closed that day.” “So let’s do a PRE-Noche Buena Event!” And that’s how the idea was born.

This was basically an event to get friends and strangers alike to one meeting place for a good time before they spent their actual Noche Buena with their families.

Lincoln’s pulled no punches for this event. Cafe La Llave was handing out free coffee; they did a collaboration coffee stout with 305 Cafecito, who was also helping out at the event; Martha of Miami selling her original Miami style gear; Dos Croqueta’s selling a variety of items, including, you guessed it, croquetas! Chef Daniel Ramirez of The Westchester restaurant did a thai style lechon on a caja china; Vicky Bakery who was giving out pastelitos, papa rellena and flan & Sweet Melody who was selling their ice cream. 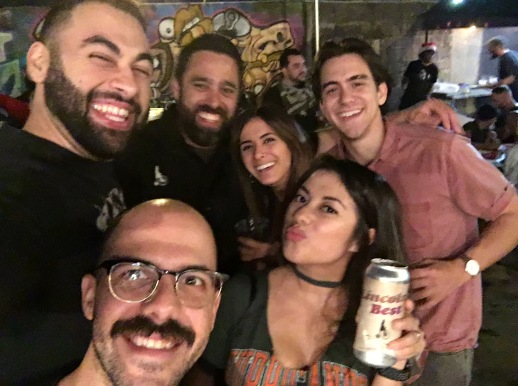 And what’s even better was Falco (since 6pm) was shotgunning a beer every hour on the hour till 12am midnight to bring in Noche Buena in style.

Of course it turned out to be a great event with good laughs and good times and I cannot wait to see what Lincoln’s comes up with next!