So this time around in our local brewery tour, Marilyn and I went a little further South from our usual haunts; this brewery SLASH WINERY we had the chance to visit was none other than Miami’s own Miami Brewing Company/Schnebly’s Winery; and with all of the history behind this place it is all the more worth the trip.

Peter and Denisse Schnebly have been living and working in South Florida for over 37 years; the Schnebly’s set a goal for themselves of starting up an agro-tourism business based off of their farms in the Redlands of South Florida. After a visit from their friend Bill Wagner (owner of Wagner Winery in New York) in the spring of 2003 and after some convincing on Bill’s part, the Schnebly’s decided to start a winery with wine made from exotic fruits which in turn provided the answer to the their wants and needs of cultivating an agro-tourism based business off of the land they owned!

In the fall of 2003, the Schnebly’s began experimenting with the fruits of their labor (literally) making wine out of their garage in the evenings; friendship played a pivotal role once again when Doug Knapp (former owner of Knapp Winery) provided guidance in the process of making wine from tropical fruits that Florida is known to produce. Sustainable farming became a top priority as Schnebly wines are made from only the finest fruits; each mango, lychee, guava, passion fruit and Carambola is personally picked for fermentation. Fun fact, Schneblys is the only winery that uses guava in their wine.

Then in 2011, the Schneblys decided to dive into the beer business as well with the founding of the Miami Brewing Company. They knew they needed to have a broader appeal to their local market and this was their answer. What they didn’t know was that they had just founded the first commercial production brewery in Miami-Dade County.

What Marilyn and I learned while walking through the grounds on our visit to the brewery was that Peter Schnebly purchased a canning machine from overseas and when it was delivered ALL OF THE ASSEMBLY INSTRUCTIONS WERE IN MANDARIN. They had to put out ads to hopefully find an engineer that read mandarin and would be able to put the canning machine together, but to no avail. Until one day, just a couple acres down the road they learned that a lychee farmer had moved from China and originally had a career as an engineer; after some talking to and being a kind neighbor, they finally had their canning machine up and running! And I’m sure through that kindness that the lychee farmer provided to the Schnebly’s, he found himself a lifelong buyer for his product!

Their flagship beers are the Big Rod Coconut Ale, Shark Bait Mango Wheat Ale, Vice IPA & Gator Tail Brown Ale. The aforementioned brews call upon the dynamic flavors that are made available through the acres of tropical produce that still populate the winery and brewery premises today. Fun Fact: Milton who works at the winery will sometimes work at the brewery as a brewer as well!

The last piece of the puzzle was put into place in late 2014 with the addition of Schnebly’s RedLander Restaurant. Using local ingredients, sourced from Florida only, Schnebly’s has a variety of meals that all patrons who come to visit the brewery and/or winery can enjoy as they sip their favorite beverages.

The trailer that they used to do tastings out of and where the original winery was based out of is still there today and is used as the main office for Peter and Denisse. What’s also cool is that when Schneblys hosts weddings, the office is transformed into the bridal suite! And from an engineering perspective what you have to come to admire is the natural beauty of the area. When you walk in it’s like a tropical oasis in the middle of Homestead. What’s super cool is that they dug up all the coral rock that forms the natural beauty of the winery from right under the ground your walking on while on your visit.

But before I get too swept up in the beauty of the venue, let’s talk about what we came here for… BEER!

Catch & Release (5.3% ABV): Our lightest wheat ale its crisp and refreshing to the last drop.

Blue Fin (5.3% ABV): Our lightest wheat ale its crisp and refreshing to the last drop. In honor of the Miami Dolphins; it is the Catch & Release brewed with spirulina.

Flamingo Ale (5.3% ABV): A tropical blend of coconut blonde ale with our mango wheat. A smooth refreshing blend, light in body with a crisp finish. Perfect for a day at hte beach or sharing good times with good friends.

Jack O’ Spades Pumpkin Ale (6.0% ABV): Made with pumpkin puree, this smooth ale has smells of sweet malts, clove, cinnamon and nutmeg providing a subtle spiciness with a refreshing back end of fresh pumpkin.

Big Rod Coconut Blonde Ale (5.3% ABV): A classic blonde ale with generous additions of coconut and sweet, caramel malts giving the beer a delightful tropical character. It pours a clear golden colour and has a strong malty backbone followed by a dry finish.

Miami Vice IPA (7.1% ABV): American India Pale Ale that pours a light straw colour with a fluffy white head. Light, crisp and citrus hop aromas on a malty backbone with fruity hop notes on the nose. Hop-forward flavors with notes of citrus hops on the palate.

Cocovice IPA (7.1% ABV): A sweet coconut taste and aroma with a hoppy finish.

Imperial Black Jack (12% ABV): A smooth blend of our 2014 imperial jack pumpkin blended with our 2013 russian imperial stout after being stored for 9-12 months in Jack Daniels Barrels.

Daddy’s Porter (4.2% ABV): A light in body porter with coffee and chocolate notes ending with a smooth caramel finish.

Red Sangria: Is brewed on site and for Sergios Restaurants.

Flamingo Ale: golden straw colour; slight sweetness in the scent of mango with hints of coconut; Delicious, nice body with a nice finish. you taste what you smell.

Big Rod Coconut Blonde Ale: Nice gold colour; is a bit sweet on the nose with hints of coconut; taste exactly like a sweet coconut.

Cocovice IPA: Gold colour; nice mix of sweetness of hoppiness both in scent and taste, crisp as well.

FlorIPA: Amber colour; citrusy taste, more like oranges, and citrusy notes on the nose as well. Light and crisp.

Imperial Black Jack: Black colour; pours with a nice head and has whiskey, malty scents; you get the whiskey barrel taste with a roasted malt and dark chocolate taste as well.

Little Havana Cafe Con Leche: Black colour; you definitely get the scent and taste of coffee as well, it’s a sweet stout.

Daddy’s Porter: Brown colour; caramel scents with some notes of a light coffee; goes down smooth, you get the taste of a light caramel chocolate.

Red Sangria: Is a nice deep red; has a nice cut on the nose from the fruits in the sangria mixed in with the wine; fruity, goes down easy.

So all in all with the ambiance of the brewery, the food and the beers we were served I would give Miami Brewing Company 5 out of 5 piggys!

They have a lot to offer in terms of merchandise and discounts, so just stay up to date and keep on checking their social media as well!

And while you’re out there you can grab some food either at the brewery or the Redlander restaurant. I’ve had the pleasure of eating at the restaurant before and it is definitely a treat and great date night! 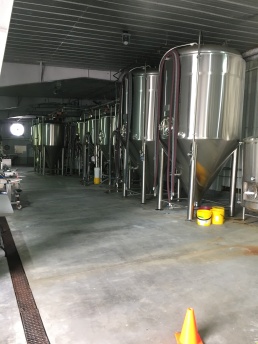 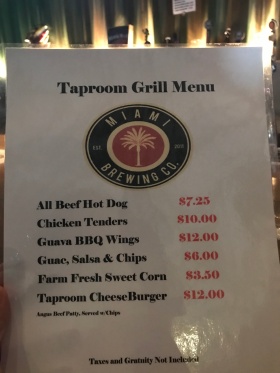 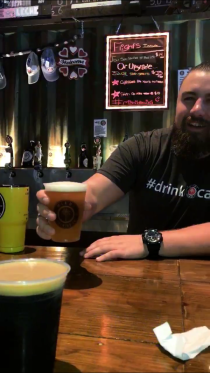