While the name may imply a vegetarian/vegan establishment, this place is anything but. Now don’t get me wrong, they do have vegetarian and vegan options on the menu, but they have plenty of other options available for all to enjoy.

But before the start of any great meal, you need to have a good drank in hand; and that’s exactly what we did! Mari started off with the fresh, homemade “Apple & Strawberries White Sangria” which comes with apples, strawberries and pineapples with Toscano & I had the “Sake Mojito” which comes with sake, mint, lime, simple syrup and club soda. 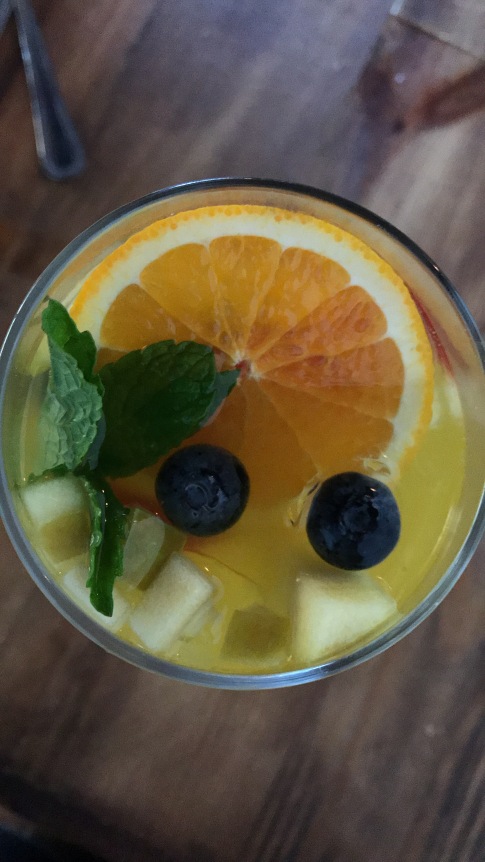 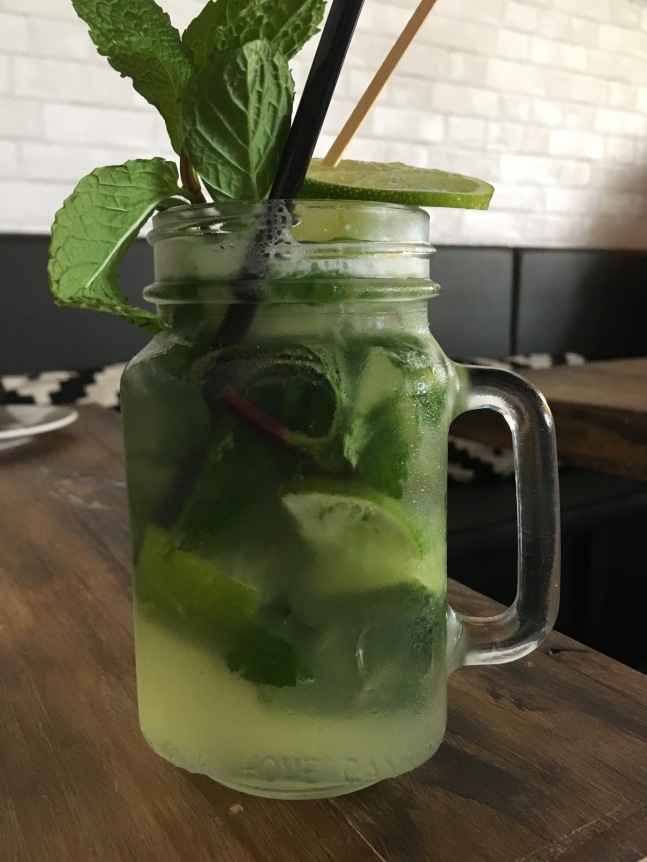 While we did start with those, later on in the meal I had the “Tokyo Bloody Mary” which had sake, tomato juice, lemon juice and pepper and I finished off the meal with a french beer I have never had before called Kronenbourg 1664 which was a pale lager. Now that the drinks are out of the way, on to the food! 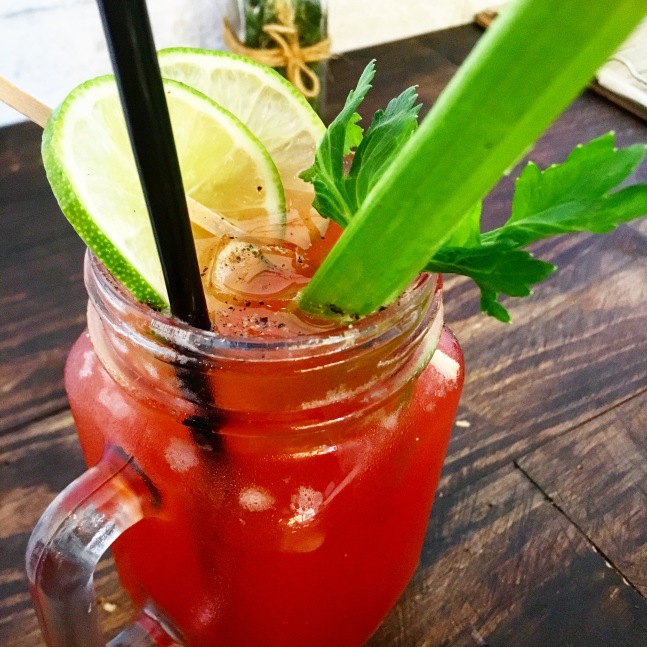 Before I go on to tell you about the amazing dining experience we had, let it be known that this was probably the first outing that we’ve had that made us tap out and box up our leftover food to take home. The portions here are more than generous and are enough to feed anyone with a huge appetite; I left with a food baby and went into a food induced coma when we got home.

By the way, I just have to let you know that aside from their amazing food and drinks, the service we received from the wait staff while we were there was beyond amazing. They were quick to lend a helping hand, were extremely gracious, super personable and would check up on you every so often to make sure all your needs were being met.

We started off our dine with the Truffle Tuna Bites and OH. MY. GOD. I would definitely recommend you order one plate for yourself and forget the rest of the table. This dish was so delicious, each toast had layers of flavor, but with the other ingredients included they were all equally balanced and complemented each other extremely well. There were six pieces of mini toast topped with guacamole, fresh tuna, aji amarillo aioli & caviar. Can’t forget those crunchy bread crumbs either! 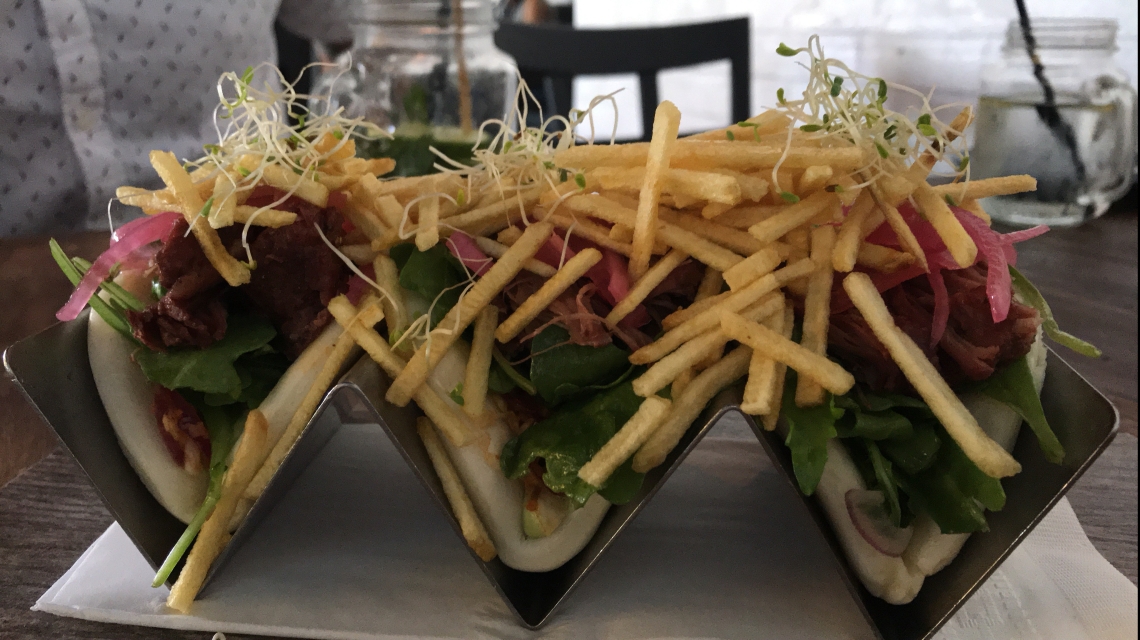 Then we moved on to the bao buns. It was a hard choice to make, but Mari and I settled on the Short Rib Bao Buns (you also have the choice of salmon, portobello, shrimp or lomo saltado buns and each order comes with three); you can taste the freshness of the warm bao buns with how well the meat was marinated & sauteed, the bite you took would instantly melt in your mouth.

We then moved on to the Eggplant Avocado Salad. From left to right you had sauteed eggplants, a freshly sliced and minimally seasoned avocado, a breaded soft boiled egg and a quinoa salad with fresh arugula, tomato, peppers and sesame seeds!

And the dish Mari and I will always order if it is an option at a restaurant… OCTOPUS!!! This was by far one of my favorites dishes of the whole day. It was charred crispy on the outside so you got that nice CRUNCH when you bit into it, but it was so soft and tender on the inside, that this was a dish you tried to savor as much as possible. My mouth is watering just talking about it now. 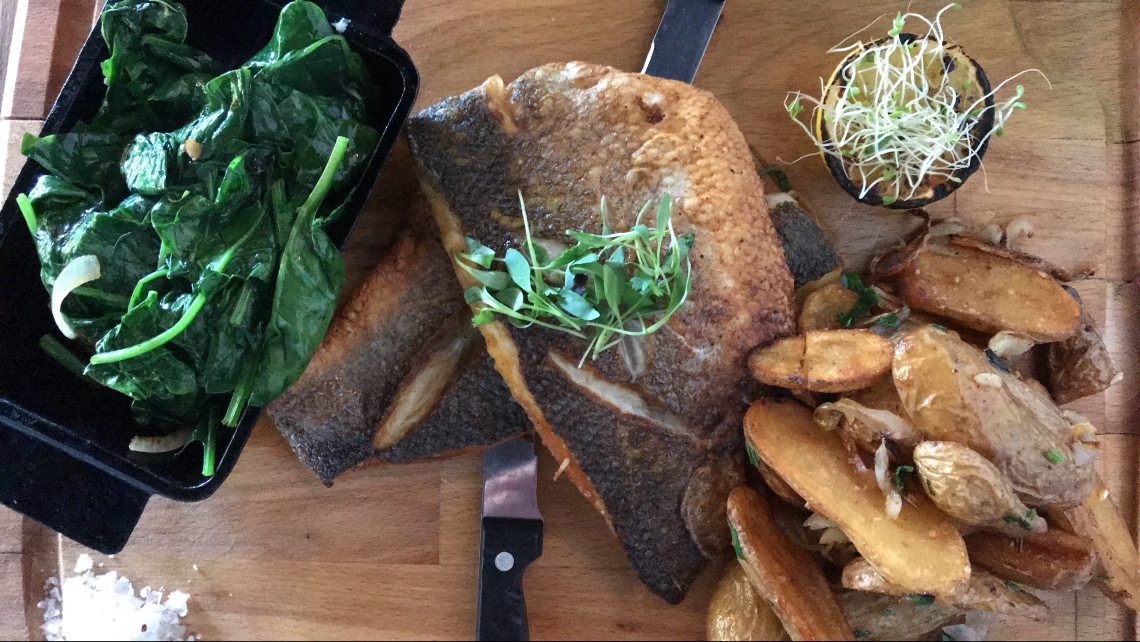 And finally, the piece de la resistance… the Branzino Fillet! That was honestly the first time I ever tried Branzino and I was not at all disappointed. We were beyond stuffed by this point and I was honestly just going to take a nibble to try the fillet fresh out of the kitchen, but once I tasted it, I ate half the plate. Everything here (just as all the other dishes we tried) complimented every other ingredient gloriously. The seared crispy skin of the Branzino, with the crispy, thick cut french fries and the sauteed spinach was all so exquisite that Mari had to literally pull the plate away from me so I would stop.

This was a little out of the way for us seeing as how we live in Kendall and drove to North Miami to check out “Lettuce & Tomato”, but it was more than worth it. I can’t wait to see the other establishments that will open up under the banner of “Guy & The Tomato” and you better believe that I’m going to be spending a lot more time in North Miami in the near future!