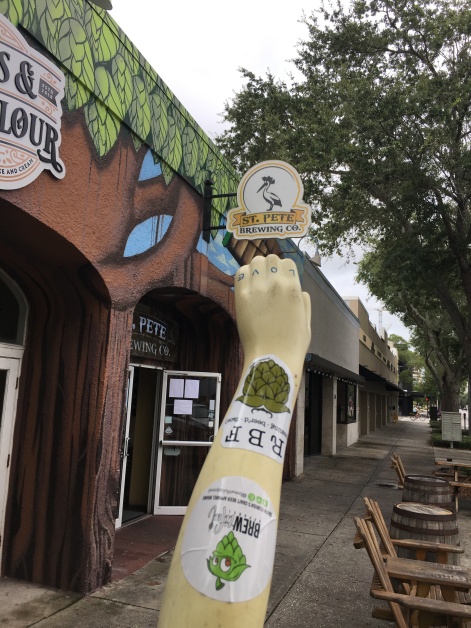 When you walk into St. Pete’s Brewing Company you will be overcome with a feeling similar to one like you’re walking into your own home. With a welcoming vibe and a table in the back set up with four chairs, four controllers and an N64, you will automatically be shot back to your childhood. But we’re not here for that, we’re here for the beer! 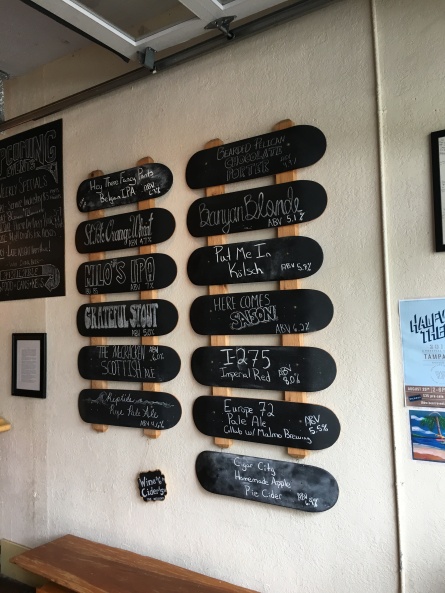 Tom has always had a love of beer. He grew up collecting beer cans as a kid! While attending Boston University, Tom was inspired by Sam Adams and began home brewing, naming his first brew “Fairfield 7” after his street address. After college, he moved to San Francisco and then in 2003 he moved down to St. Petersburg when he started home brewing again. During this time, Tom financed over 100 microbreweries with his finance company “eLease” which is located next door, which then enabled him to learn more about the business side of the industry and become passionate about opening a brewery. 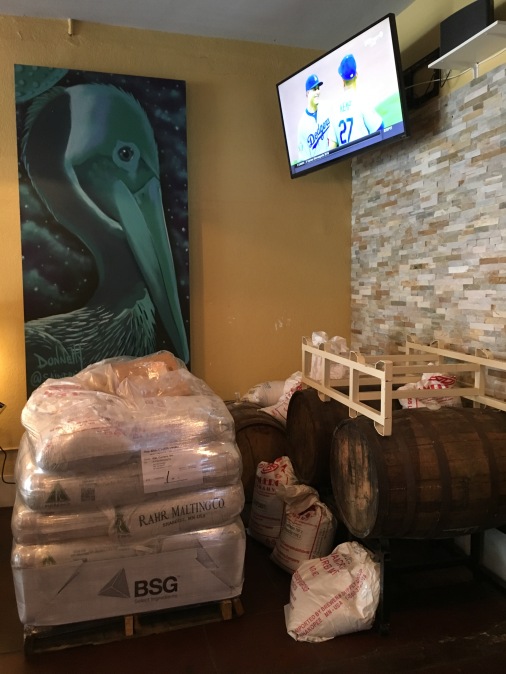 In 2010, laws in St. Pete banned the manufacturing of malt beverages. Tom did not want to wait until the laws were passed, so he had the first recipe contracted with another brewery for sales and distribution in St. Pete. And then in 2012, a change by the city council allowed businesses zoned as microbrewerys’ to create and sell their craft beer. This was good news for local St. Pete beer lovers; this opened the door for St. Pete to become a microbrewery destination. 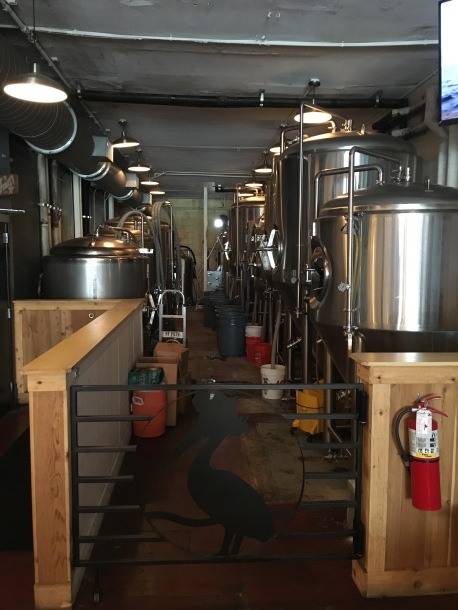 Profressional brewer, Jon McCracken, moved to St. Petersburg with the hopes of opening up a brewery. Jon began as home brewer in 1999. He loved every aspect about brewing; the brewing process, the chance for creativity, the art of creation, oh and that brewing smell! Jon found such a love for brewing that he decided to take brewing from his small home stove and make it into a career. Jon graduated from the American Brewer’s Guild in 2007. 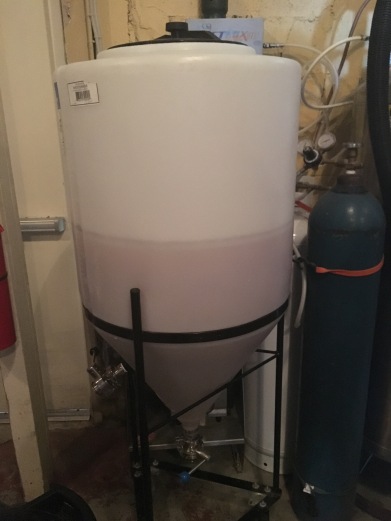 Jon started his brewing career in Burlington, Vermont as head brewer at Three Needs Brewery. Prior to working at Three Needs though, Jon was actually an Environmental Specialist at a lab. He started homebrewing and completely fell in love with his hobby. He eventually brought it up to his wife at the time that he wanted to brew beer for a living and she was against it. Jon and his wife could not find a middle ground so they ended up getting a divorce. He started going to brew school and his wife stayed behind at the environmental lab; while Jon was working at Three Needs he met his new wife (Aida) and they had been together ever since! 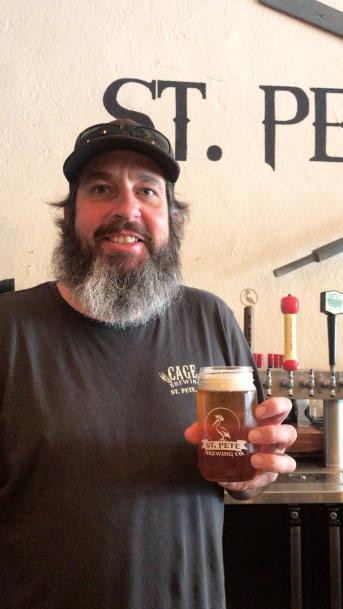 A move to the West Coast of California, allowed Jon to work at El Toro Brewing Company and Hermitage Brewing Company. A move from California to St. Pete opened another opportunity to work at Tampa Bay Brewing Company. While enjoying a beer at the Ale and the Witch, bartender Vickie Moran wrote down Tom Williams’ contact information, as Jon was in search of a local brewery job. Jon kept that card for over a year, and made contact with Tom in 2013, when Tom and Michele had just found a building for the brewery, Tom, Michele, Jon and Aida, met and St. Pete Brewing Company was born.

And like I said earlier, this bar screams homey vibes. If you want a place that you can just wind down; drink beers that are to style (and some that are not), but are all refreshing and delicious, then you HAVE TO come check this place out. 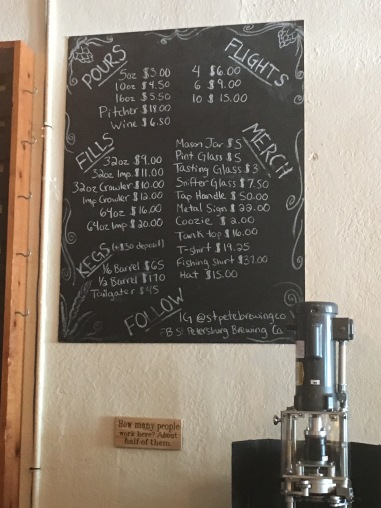 And something to look for in the future is Beans & Barlour which is a craft coffee bar and dessert lounge featuring cocktail inspired alcohol infused ice cream (which partners perfectly with St. Petes brewing next door; they already have a couple of flavors of ice cream with their beers infused). 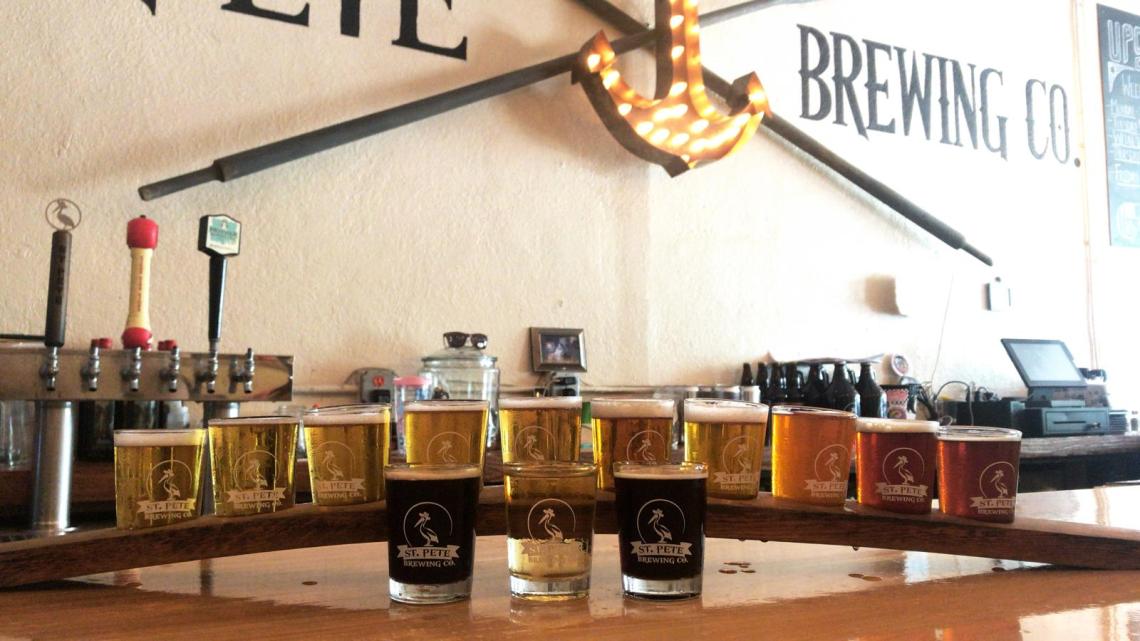 St. Pete Orange Wheat [American Wheat Beer (4.7% ABV)]: St. Pete Orange Wheat is a wonderful anytime American style wheat beer with a crisp hint of orange and coriander. Whether you are out on the boat, on the beach or mowing the lawn, it’s your go to beer for quenching your thirst. This is the first beer produced for the public by Tom & Michele. Our Orange Wheat is brewed with sweet orange peels and coriander seeds that provide that crisp, fresh aroma and taste.

Banyan Blonde Ale [Blonde Ale (5.4% ABV)]: Our Banyan Blonde Ale was named after the beautiful Banyan tree that grows locally in St. Petes. Thomas Alva Edison planted the first Banyan tree in Ft. Myers in 1925, which has grown to the third largest in the world. Banyan trees are extremely unique, growing downward from branches with swinging ariel roots which eventually create new trunks. Our Blonde is a ligh bodied ale fermented at a lower temperature with a light hop aroma.

Europe 72 Pale Ale [American Pale Ale (5.5% ABV)]: A colaboration we did with Malmo Brewing from Sweden. We used Centennial, Chinook and Idaho 7 hops.

Hey There Fancy Pants [Belgian IPA (6.3% ABV)]: Named after the Ween song, this full bodied IPA was brewed with Belgian Yeast and hopped with Saaz & Hallertau.

Milo’s IPA [American IPA (7.0% ABV)]: Milo’s was created by Jon in celebration of his dog Milo. Milo was not your average dog, he didn’t swim, play catch or do anything that a dog is supposed to do; He did enjoy the good things in life like naps, food and licking puddles of Jon’s IPA when it “accidentally” hit the ground. Milo’s IPA is a medium bodied west coast IPA with 6 hop additions of Northern Brewer Chinook & Columbus.

I-275 Imperial Red [American Brown Ale (8.0% ABV)]: A bold flavored Imperial Red using two types of Caramunich for sweetness and hopped with Chinook and Columbus for a nice hop presence.

McCracken Scottish Ale [Scottish Heavy (6.0% ABV)]: Our Scottish Ale is full bodied with a sweet caramel and malt character and named after owner/brewer Jon McCracken. Hopped with EKG and Sterling Hops which add a bitter, earthy and rounded flavor. The color is a deep copper and brown. The Scottish provides a rich and malty mouthfeel.

Bearded Pelican Chocolate Porter [American Porter (4.9% ABV)]: Our chocolate Porter is a rich and decadent beer with intense roasted coffee and chocolate notes, coupled with light bitterness from the German northern brewer hops. Fifty pounds of choclate malt created the dark coloring chocoholics, be ready for a unique beer that finishes with a silky, velvety mouthfeel.

Grateful Stout [America Stout (5.0% ABV)]:  Our grateful Stout was named after our brewer Jon’s love for the Grateful Dead. He spent many years following the Dead around the country and sampling great beer. Grateful Stout is a dry stout with coffee-like character. 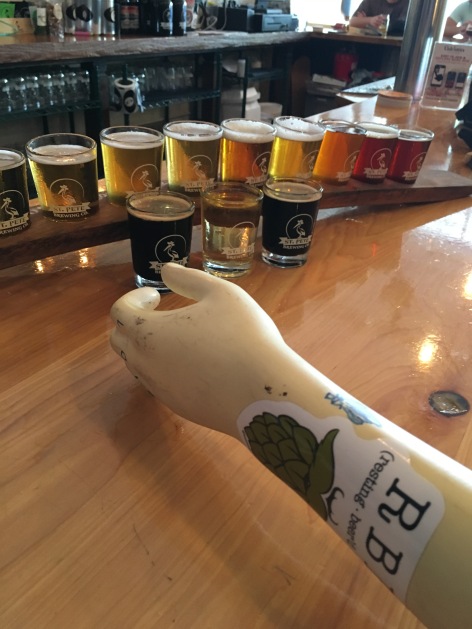 St. Pete Orange Wheat: A super crisp, light and refreshing wheat beer. You definitely taste the notes of orange on this.

Europe 72 Pale Ale: Another crisp and refreshing beer. Definitely has the pop from the hops, but it’s not overbearing.

Here Comes Saison: This was an amazing Saison. Not over peppered, easy drinking, refreshing and crisp with a nice finish.

Put Me In Kolsch: This is a legit Kolsch and brewed to style. Super crisp and refreshing. And a slight hint of fruit in the aftertaste.

Riptide Rye: You definitely get the rye bread tastes on this; felt like I just finished eating a loaf of bread. Went down super smooth.

Milo’s IPA: A tad bitter, but super delicious, crisp and light. You get a tad bit of a malty taste to it, but the hops finish it off.

McCracken Scottish Ale: You don’t find it often, but this is a true to style Scottish Ale. Bitter, malty, a great body to this ale.

Grateful Stout: A great stout. Dry finish, but you get the coffee and roasted malt notes on this one.

Tallboy IPA: This was delicious even without the carbonation; we got to try it before its release. Super hoppy and will be even better when the carbonation gets added.

Home Made Apple Pie: Legit tastes like McDonalds apple pie. Sweet, apple tastes. Delicious, but too sweet for me. 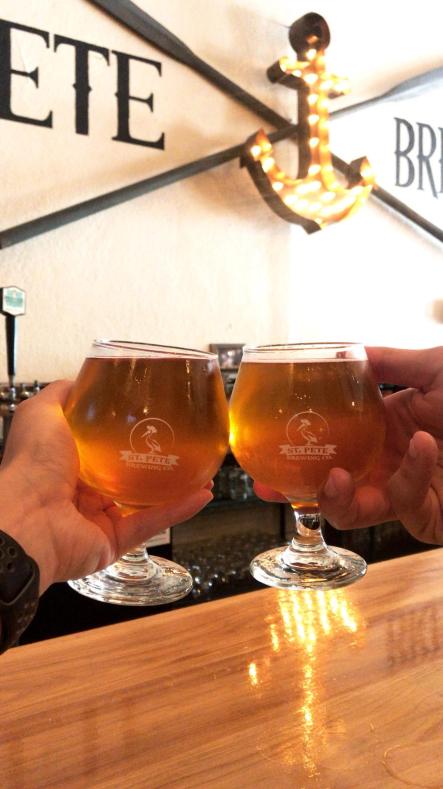 So all in all with the ambiance of the brewery and the beers we were served I would give St. Pete’s Brewing Company 5 out of 5 piggys! 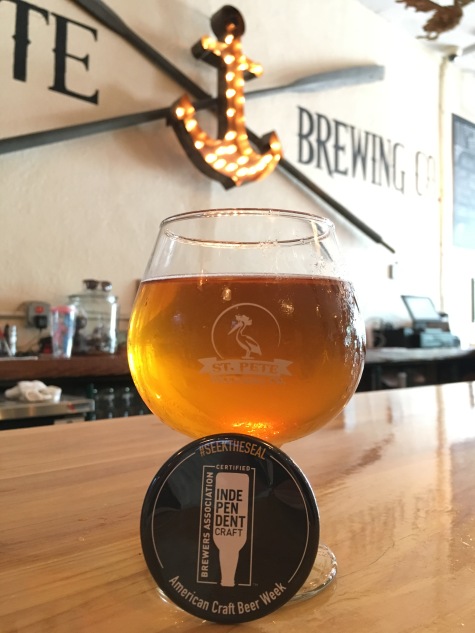